You can read more about lefthanders on our affiliated websites

News and Information for and about Lefthanded People

You might also want to
visit our other websites

We know that Ned Flanders is just a cartoon character and not a real life person, but he is the only character on television that has ever owned and operated a store for lefthanders.  For those might not be familiar with “The Simpsons” the longest running animated show in history, Ned Flanders is the neighbor of Homer Simpson, sometimes friend and sometimes nemesis.

In a 1991 episode (third episode/third season) titled “When Flanders Failed” Flanders invests his life savings into The Leftorium, a store for lefthanders in the Springfield Mall.  Homer makes fun of his neighbor and his crazy idea, and he secretly wished that the store would fail.  After a while with little business the store did close, but then Homer felt bad for Ned and convinced him to reopen the store for one last time.  Homer went out and convinced every lefthander in town to support The Leftorium and they all flocked to the store and made it a success.

The episode was very timely, as it followed a twenty year period when there dozens of real life stores just like The Leftorium in shopping malls around the country.  Most of them went out of business because they didn’t have anyone like Homer to come to the rescue. 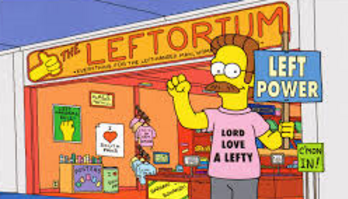 A Left-Handed Hero: Ned Flanders, Owner of The Leftorium